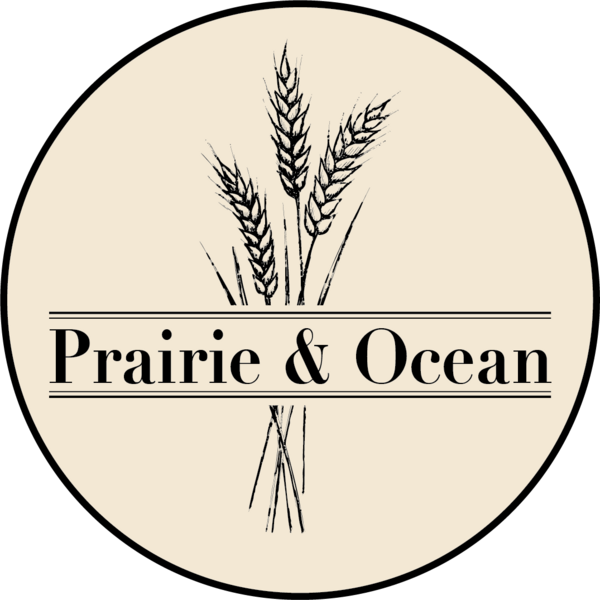 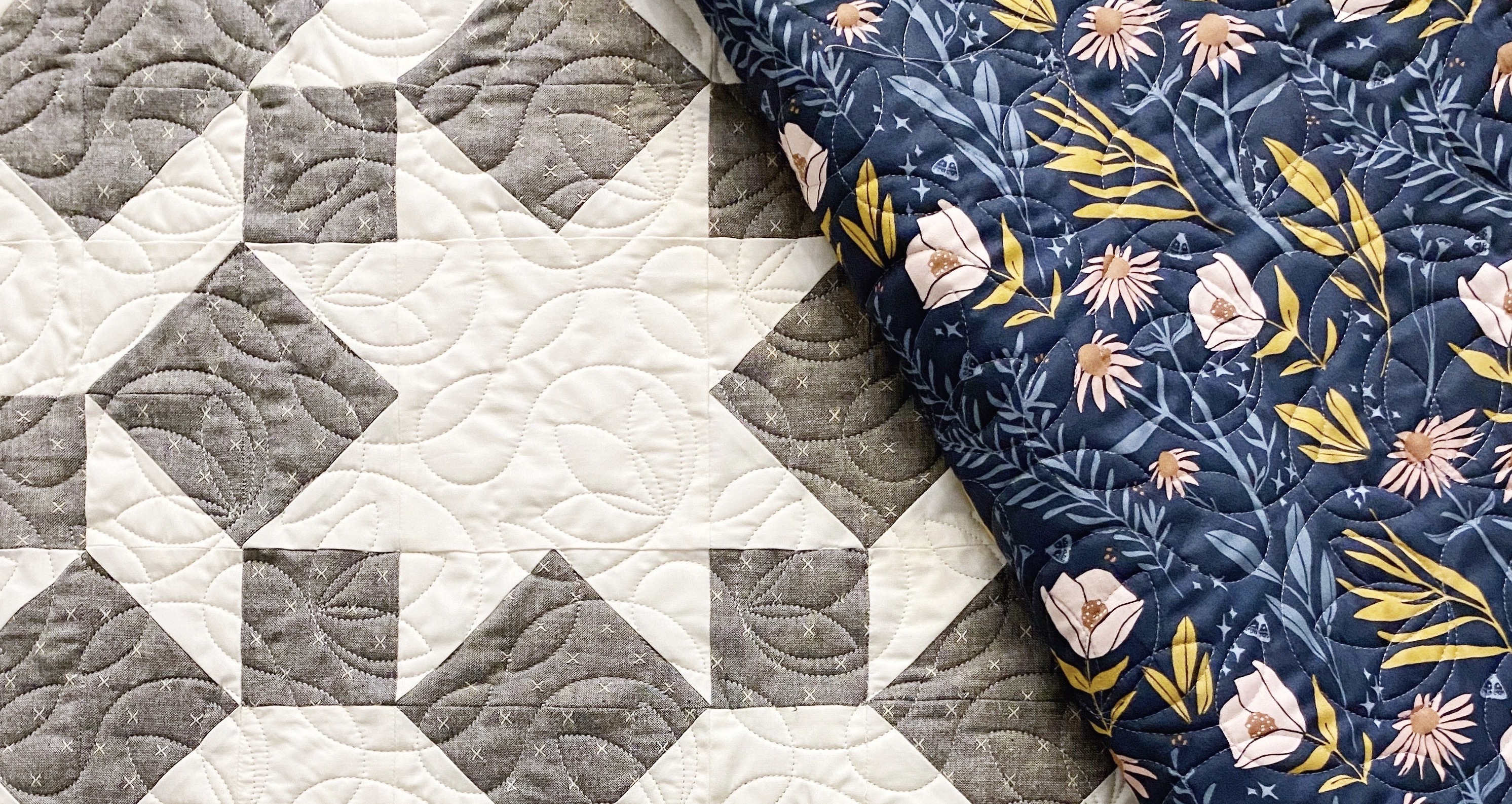 Photo and quilting by @jenng.quiltco

The idea that started it all

Aperiodic came about after a conversation with my Dad. I had made him a quilt for Christmas based on Penrose tiles (you've definitely seen this pattern on a cafe or bathroom floor at some point), and being the nerdy family that we are, we started talking about different tiling patterns. He recommended that I check out Ammann-Beenker tiling and when I saw it, I found it way more visually appealing than Penrose tiles. And so began an idea that would sit in my head for the next two years.

But what is Ammann-Beenker tiling? 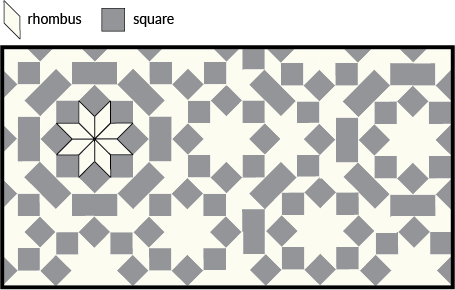 My original plan was to make this quilt using English Paper Piecing, similar to my Penrose tiles quilt. My Dad even made me my own acrylic templates for cutting. I started and worked on it on and off for a couple months, but I really didn't love my fabric choices and I soon got frustrated with how long it would take me to make the whole thing. I had planned it to be at least 60" square so I think it was destined from the start to be my token WIP that never gets finished. 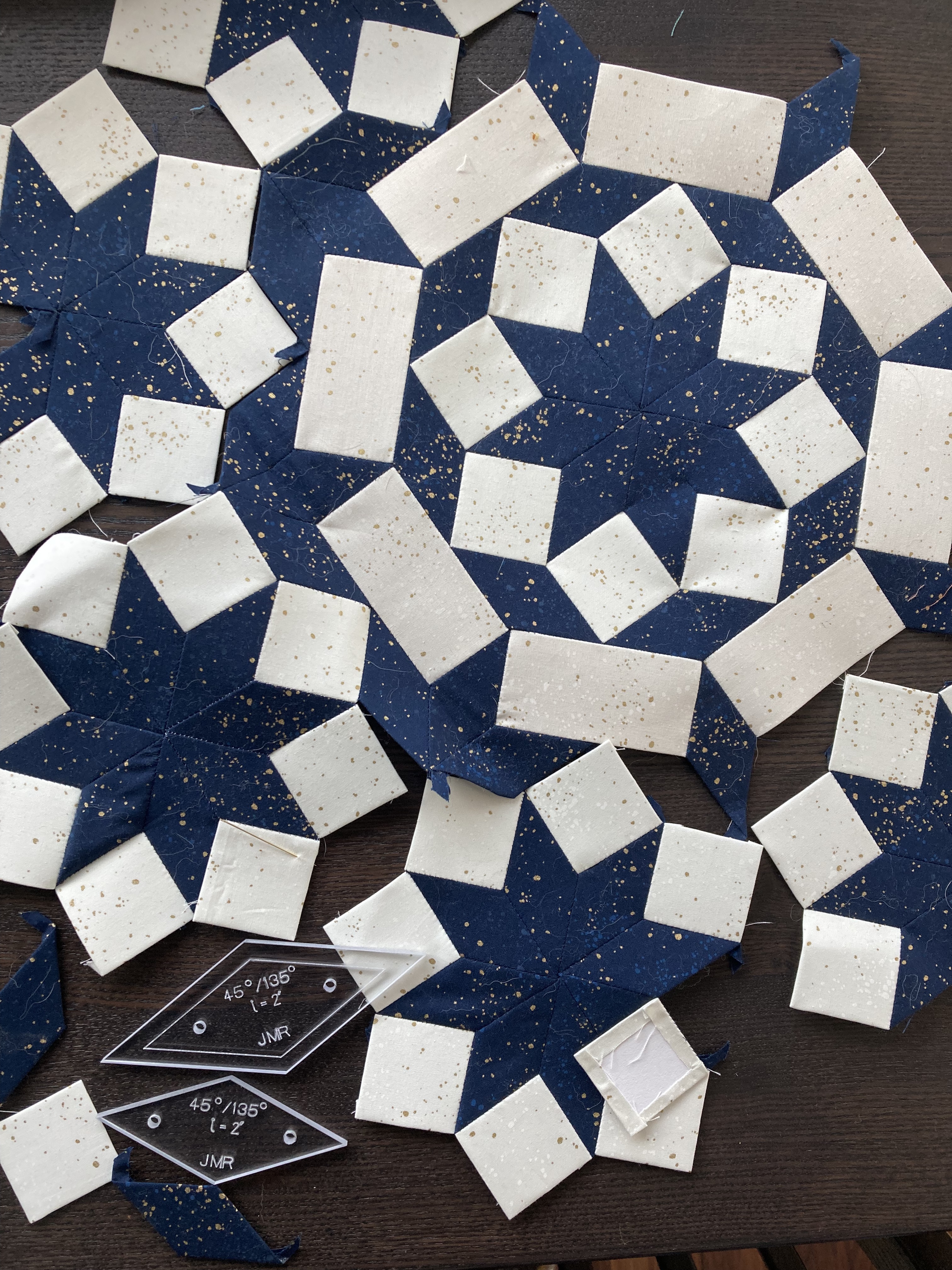 Second attempt - just a straight no from me

My Dad asked a couple times why I couldn't just make it using my sewing machine, and I had to explain that to do that, I would have to do a whole lot of Y-seams. Credit where it's due - he has used a sewing machine before to make some winter cycling gear, but I'm pretty sure that didn't entail using Y-seams. I liked the pattern, but I wasn't committed enough to do that many Y-seams.

Third time is the charm

One night when I was creatively blocked on what to sew next, I went back to my Illustrator file where I had drawn out the Ammann-Beenker tiling. I stared at it for a while and then wondered what would happen if I changed the stars to sawtooth stars. Sawtooth stars - something I'm normally not a fan of but were definitely within my ability to sew.

The other advantage to modifying the AB tiling is that it converted the tiling onto a grid. That meant that I could now figure out how to divide the pattern into manageable blocks. It took a solid night of playing around to see what kind of repeating blocks were hidden in the design. It was like trying to reverse engineer a puzzle, which I absolutely loved doing. I was so close to cracking this design! 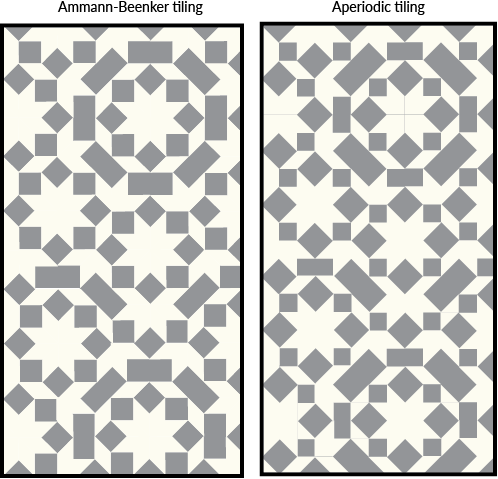 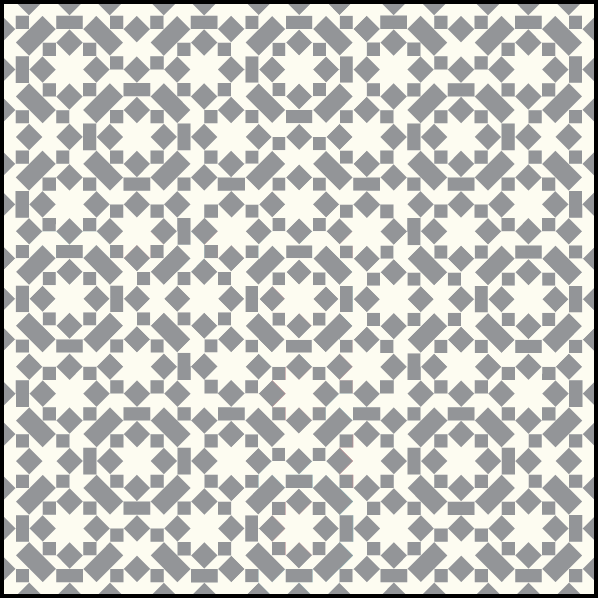 So I was golden! Well, not quite.

I cap my quilts at ~ 70"x70" because I can't (and don't want to) easily quilt it myself if it's any bigger. By doing the entire design, I would have to make super tiny HSTs and flying geese - we're talking in the 1-1.5" unfinished territory. And I'd have to make something like 450+ of them. I think you can see where the problem is - I swapped out Y-seams for months of tedium.
And so I decided to take a subset of the pattern and that became Aperiodic. 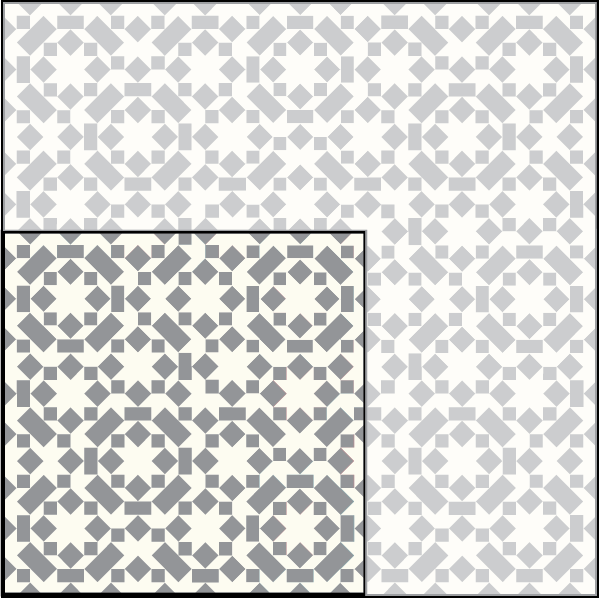 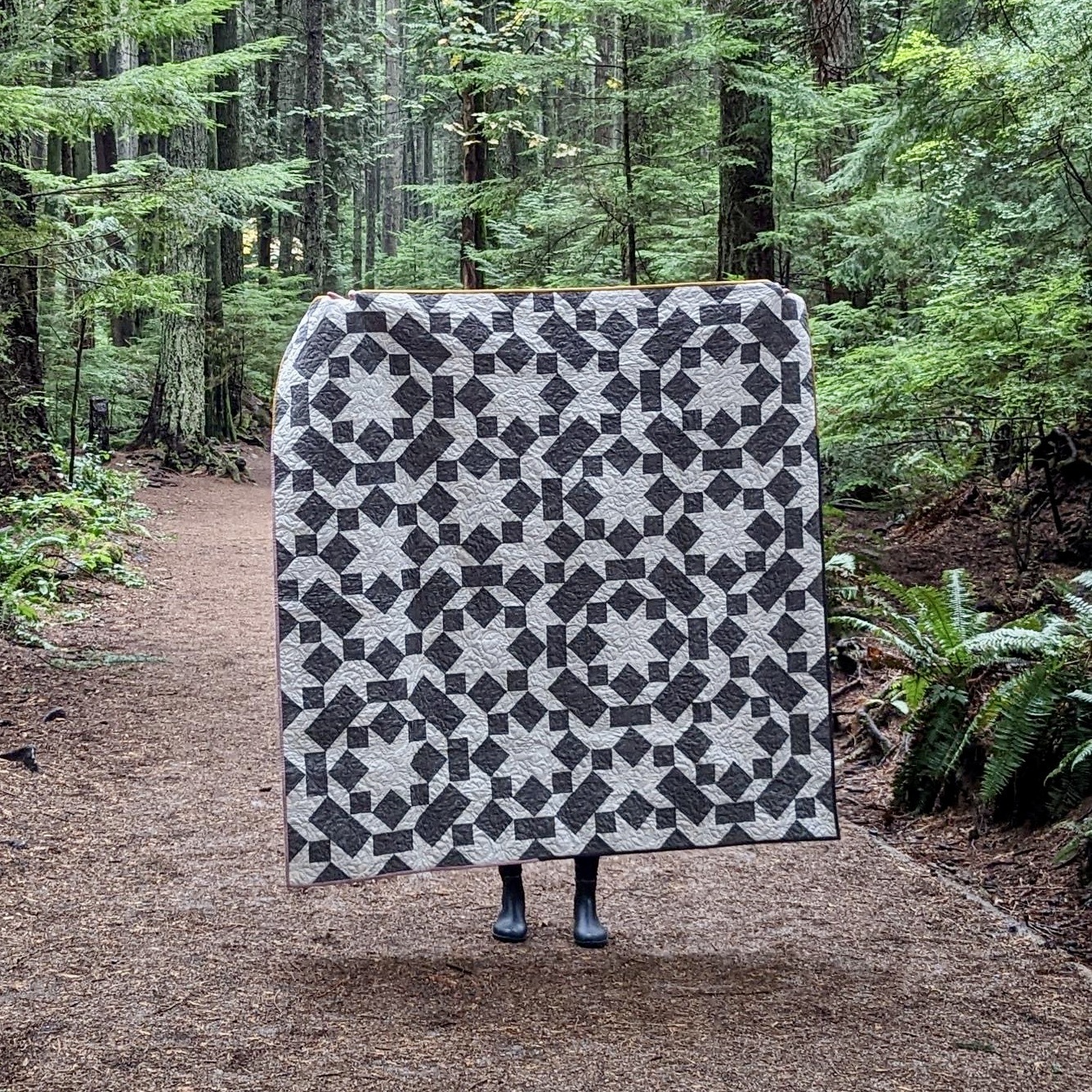 I love a two-toned quilt. I'm a muted person. I wear a lot of black and other dark solid colours, and my quilts typically reflect that. However, from a business point of view, I knew I needed to add more colour to the quilt, and I am so glad I challenged myself to do so! The small throw version below is definitely my favourite of the three. The olive oil AGF pure solid is such a fun pop! 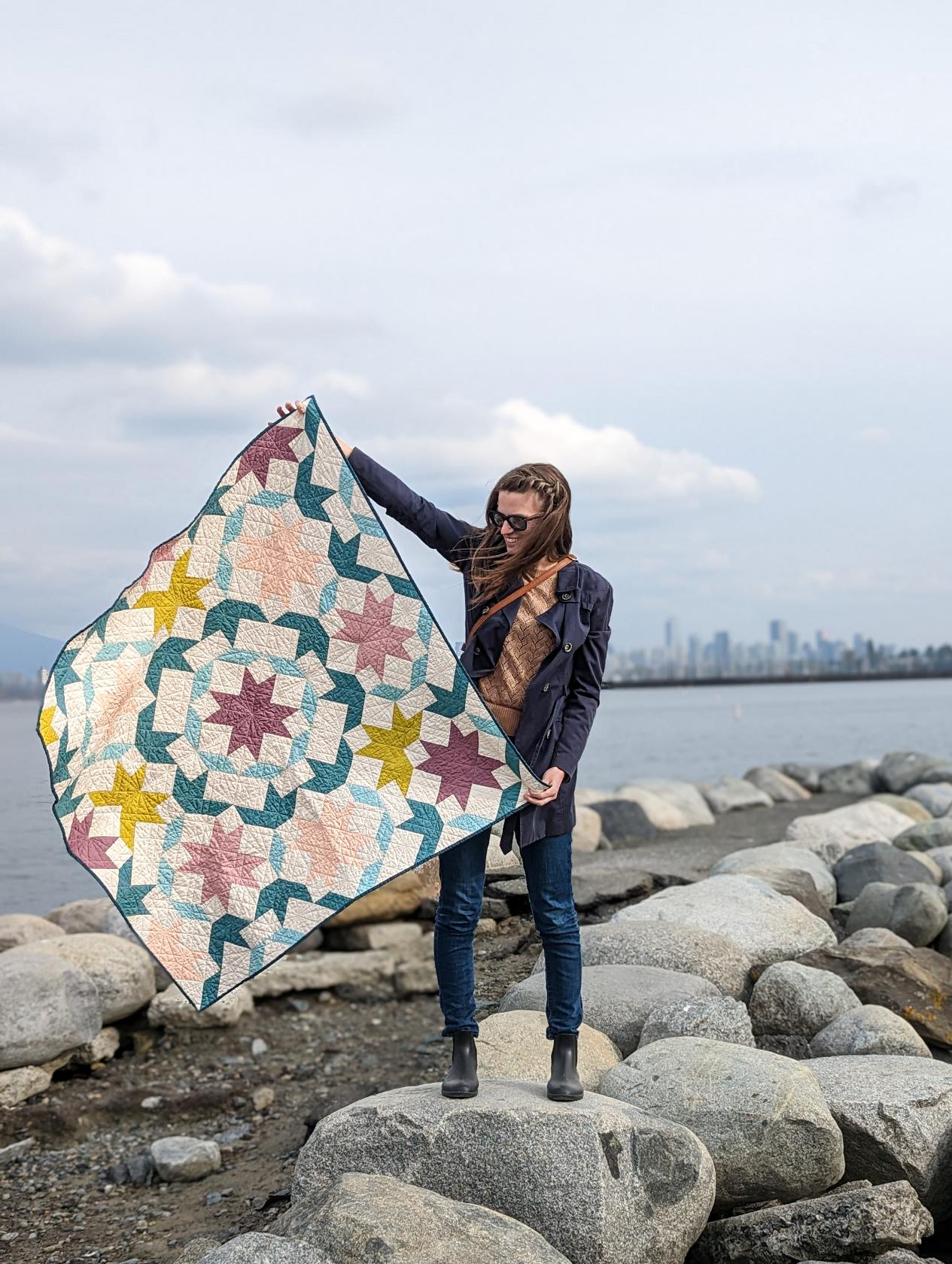 Meaning behind the name

When I decided to start making quilt patterns, I thought having a cohesive theme for the quilt pattern names would make it easier to actually come up with a name. I had settled on female scientists who had done ground breaking work (hello Donna Strickland). But that presented a conundrum for naming this quilt because two men discovered the tiling and I couldn't find another woman who had subsequently used the tiling in anything cool (or uncool). And sorry friends, calling the pattern Ammann-Beenker just wasn't going to happen.

I settled on Aperiodic pattern because that's exactly what makes this pattern so fun - there's no repetition.
Consider a sawtooth star quilt where a block is made of 4 stars in a 2x2 configuration. You can easily generate the entire quilt by translating the block left or upwards, or even make it bigger by adding a couple blocks while continuing the pattern. No rotation is needed, just simple repetitive tiling. This is known as periodic tiling.

In aperiodic tilings, there is no periodicity to the pattern. Try finding a repeating block that would replicate the whole pattern in the Ammann-Beenker diagram above - it doesn't exist (no rotations are allowed because math rules, I don't make them)

Enough math though. I hope you enjoyed a glimpse into my brain and how a simple conversation with my Dad led to two years of trying to make Ammann-Beenker tiling a sewing machine friendly quilt. 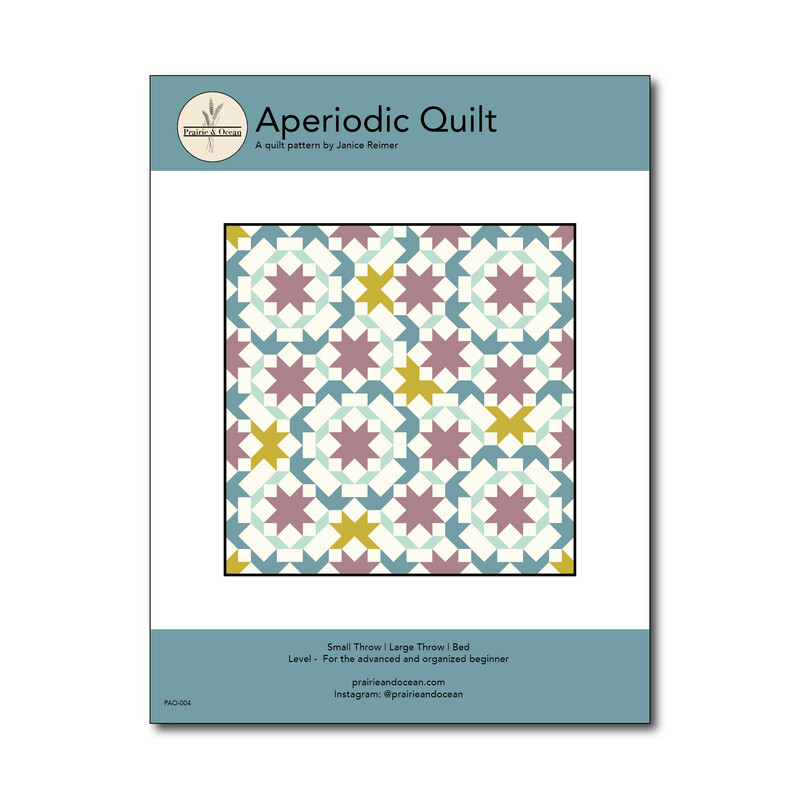 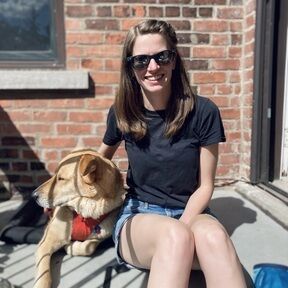 Born and raised in the Canadian prairies, Janice started quilting in 2019 while living near the ocean in San Diego.

Janice comes from a family of quilters but was always adamant about not joining the family Quilting Quorum. After finishing grad school and finding herself with an abundance of time not consumed by needy proteins and experiments, Janice found herself with a whole cloth hand quilting project. It wasn't long before she started asking her mom and aunt about what to look for in a sewing machine.

Prairie and Ocean is a team of hard working individuals. Morale Operations are run by Combo, her German Shepherd mix, and her cat Emma is the QC manager for naps under/on quilts. Both animals share the role of Disruptor of Fabric, immediately seeking their rightful place on any quilt blocks laid out on the floor.

She is supported by her loving #quilthusband Dan, who while partly colourblind, tries really hard to help with fabric selection. He knows some stuff about websites too :)